Farmer Detlef Stark started preparing early for the coronavirus crisis – one of many other challenges. But he is confident, as he has steered his farm through many other difficult periods

There’s a lot going on right now: we’re in the middle of a pandemic, the fertilizer regulation has come into force and we’re looking at a summer drought. Only a third of the grass has grown back and feed stores are all used up. If all that wasn’t bad enough, we optimistically invested in a new calf barn, a slurry tank and a farm drainage system, for around €2.5 million, as it looked like the milk price would rise. No wonder I’m having sleepless nights.

The pandemic is a challenge for us farmers, but it’s only part of the problem. Here in Mecklenburg Western Pomerania, we’ve avoided infections thanks to better hygiene measures and a complicated shift rotation system. The lockdown has played into our hands so far, as has the fact that we work together so well as a team.

We’re a pretty big operation, with 1,350 dairy cows and 1,100 young cattle, and I need a cool head just to be able to manage that. Dwelling on my fears doesn’t help, thinking about the global economy in crisis and sales falling in China and Southern Europe, and what that means for the dairy market. It also doesn’t help to feel angry with food retailers who keep reducing the price of butter, cheese and meat. And I don’t feel much better knowing politicians aren’t likely to help with food prices, given they’re trying to handle rising unemployment.

Even though things look rough, I know I’m pretty lucky. My farm is so big because it used to be an agricultural production cooperative. We supplied 34,355 kilos of milk to Deutsche Milchkontor each day in 2019. Aside from rapeseed meal, soy meal and minerals, we produce all our feed by ourselves. We process manure in our biogas facilities to make organic fertilizer for the fields. Our revenues are higher thanks to this mass production – not all farmers are so lucky. It breaks my heart to see how lovingly-managed family farms are having to sell up after generations. 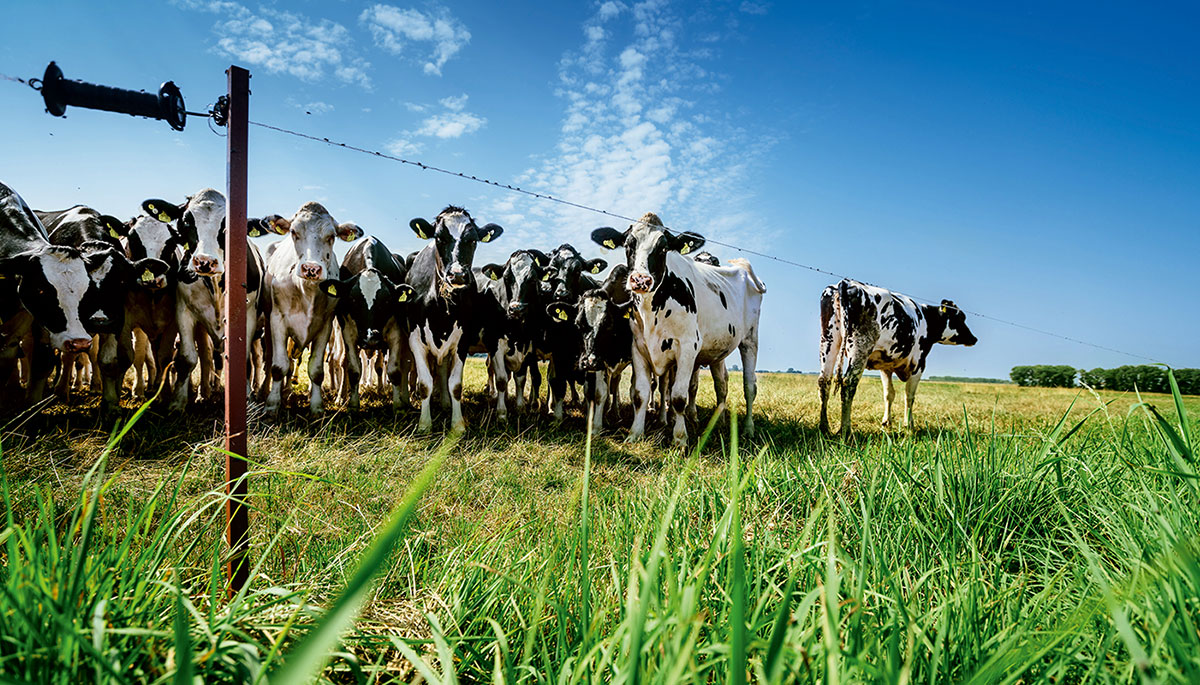 I don’t have a perfect solution for our situation. Farmers have very different operations and systems, and I don’t have an answer that would be right for everyone. I do think about it a lot though. To me, it seems clear that the conditions and relationship between dairies, farmers and retailers is going to have to be much fairer and more cooperative in the future.

Sometimes, I need time out to think clearly, in order to keep motivating my team. I force myself to get on my racing bike and ride through the Peene lowlands across to Usedom. These bike rides help me to find ways to cope and solve problems that I couldn’t have worked out if I was sitting in an office. Maybe it’s because I feel so at home here, this is where my roots are.

“We’re grappling with falling milk prices and we need liquidity and we need to be able to plan ahead.” 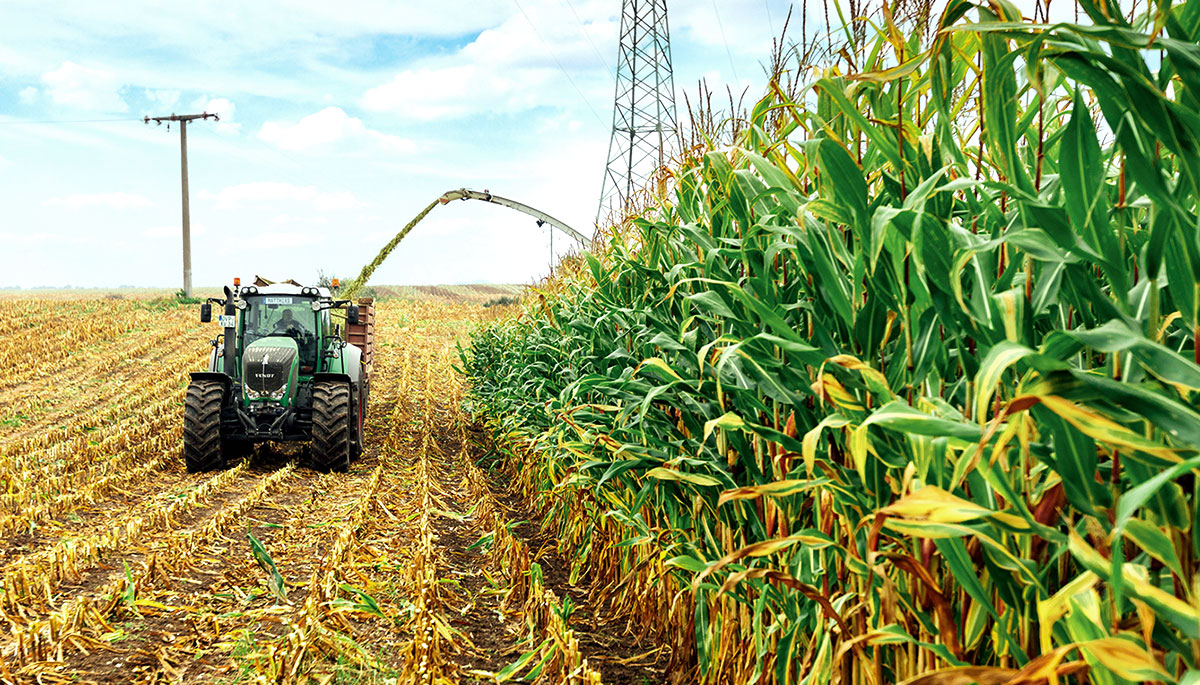 Last year’s corn harvest. Safety measures have protected the farm and its people so far. Farmer Stark is more worried about the likelihood of another dry summer

I grew up in this area. My father was chairman of the agricultural production cooperative and my mother was an accountant. Farming is the only way of life I know – at home, we had chickens, pigs and cattle. My father loved his job and I grew up seeing him managing a large business even when times were tough. It wasn’t easy – that was in former East Germany and he didn’t feel he could decide things freely for himself, as the regime and the party dominated all areas of life. He was frustrated by having to manage amid scarcity and was very happy when the Wall came down.

One of the positive things about life in the GDR, though, was there was a real sense of team spirit and family cohesion, I feel. That really helped me after the fall of the Wall. In the East, we experienced total economic collapse, and without that community support, it would have been even worse.

After that, agricultural production cooperatives were turned into farming cooperatives and I managed the merger of Anklam plant production and Anklam milk production, which had 300 and 170 workers respectively.

We had to take on loans to handle property disputes with members of the agricultural production cooperative who were leaving. We had to let people go, too – of the original 500 employees, there were only 60 left at the end. Those were the hardest conversations in my whole life. It’s terrible to fire someone who has helped to build a company. Some people in the village didn’t speak to me again for years. The thing is, without these measures, I know the operation wouldn’t have survived.

With the coronavirus right now, this is a difficult time. We’re grappling with falling milk prices, we need liquidity and we need to be able to plan ahead – and it’s a real tightrope act trying to make sure no one comes down with the virus. That would be disastrous for production on a farm like this.So times are pretty tough but I have to say it’s not as bad as the restructuring in the past, or building up the company, and all the sleepless nights I had back then. I don’t need to fire masses of people, or pay off old debts – we did that over the last 30 years. We’ve been through several crises – also the financial crisis in 2007 / 2008. All that has made us tougher and more resistant. I don’t get as rattled as I did in the past. I do know, though, that I’m very lucky because I benefit from my farm’s structure, it can’t be compared directly with other farms.

Even with the crisis right now, I still think that being a farmer is one of the best and most interesting professions around. Harvest time is stressful but in a positive way and I feel great when the harvest is good – there are lean years but there are better ones, too. I’m developing my business, expanding the stables, and shaping the landscape through how the farmland is laid out. But what matters even more than that, what’s most important to me, is that whatever I do or don’t do, I can decide for myself.”

Some of the 36 employees on Detlef Stark’s farm. They are the heart of the business and they carry it, particularly in times of crisis.