Cow health is the foundation of responsible milk production. It affects the quality and safety of milk and, consequently, of food. DMK takes a comprehensive approach to animal welfare, animal health, environmental and climate protection, economics and social affairs.

Farming systems that promote animal welfare are a key concern for us and our milk producers – because only healthy and content cows produce good quality milk and high yields. Our Milkmaster Programme defines aspects of responsible milk production and provides recommendations on a wide range of animal husbandry issues, such as freedom of movement, requirements for lying areas, calving and health areas as well as rest areas, social contact and protection from the elements.

Around 96% of the volume of milk that is processed by DMK comes from farms on which loose housing is the norm. The animals can then move around freely and therefore live healthier lives. In addition, feeding, which has a considerable impact on the climate footprint of dairy farming, can be better regulated with indoor systems. 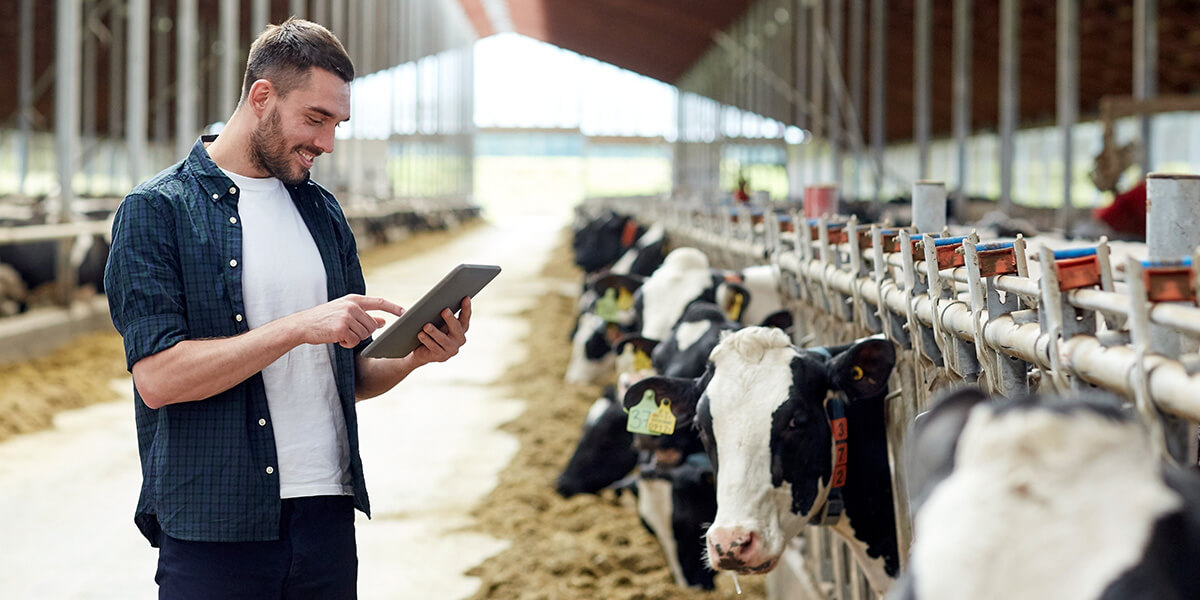 Pasture grazing has positive effects on the cows. The DMK Group believes that combining this with barn systems, where the animals are milked several times a day, is ideal. They can also stay there during the winter months when basic feeding on the pasture is not available. Furthermore, feeding, which has a significant impact on milk production’s climate footprint, can be better regulated in barns. Efficient feeding in barns can reduce methane emissions. 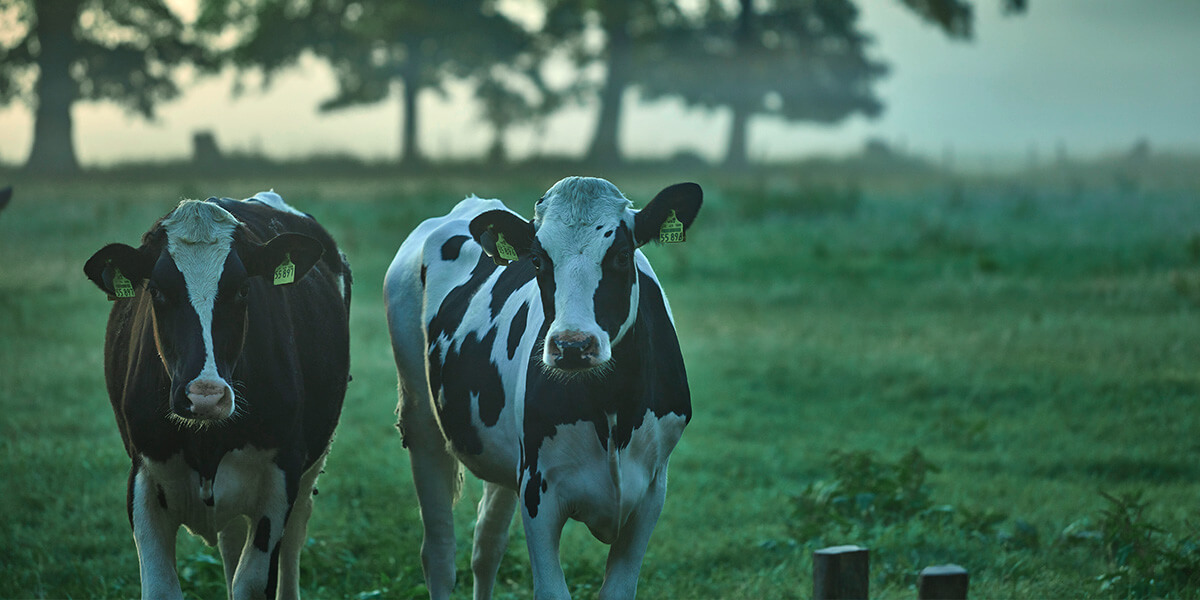 In the Milkmaster programme, the DMK Group recommends a combination of enclosure systems and pasture grazing for dairy cows and cattle on at least 120 days of the year, if the framework conditions on the farm permit this. Not every farm has sufficient pasture in the immediate vicinity of the farm, so comprehensive grazing is not viable in Germany. A large proportion of DMK milk producers, currently around 60%, allow their animals to graze temporarily. Pasture grazing is therefore very important for DMK farms, but varies greatly from region to region. Pasture grazing is a bonus criterion in the Milkmaster system.

Since the beginning of 2016, the DMK Group has switched to GMO-free feeding in selected regions and locations and offers GMO-free (“non-GMO”) products on the market, which comply with the German VLOG standard. Currently, 10 DMK Group locations have been audited and certified with the “Ohne Gentechnik” (“non-GMO”) seal according to the VLOG standard. Fresh milk switched to “non-GMO” as early as 2016. Further selected products followed in 2017, and DMK Group products for the German food retail industry are now largely GMO-free. As a result, the DMK Group has been the market leader for GMO-free dairy products since 2017. In the process, a growing number of farmers have switched to feeding their cows with GMO-free feed. Currently more than 3,000 milk producers with 3.1 billion kilograms of milk have switched to GMO-free milk production and are certified according to VLOG. The DMK Group pays farmers who have switched to GMO-free feeding a total of around EUR 30 million extra a year through the farmgate scheme.

DMK acquires RTRS certificates for cooperative milk that has not been subject to the VLOG standard in terms of the feed used. The RTRS standard was developed by a multi-stakeholder organisation initiated by the WWF as part of the Round Table for Responsible Soya. The WWF recommends the certification system, as it includes not only social criteria such as the banning of child labour, but also clear minimum requirements regarding the use of chemicals and the preservation of soil quality. The focus is especially on protecting biodiversity and enforcing strict regulations regarding land conversions to protect natural forests and other protected areas.

The German dairy industry is highly respected in society. Nevertheless, it’s also under critical observation by the public, particularly in the areas of farm animal welfare, feeding and animal health. That’s why we developed the Milkmaster Programme. It sets out not only our standards for responsible milk production, but also concrete goals. With Milkmaster, we are responding to the social debate and taking accountability for our actions. 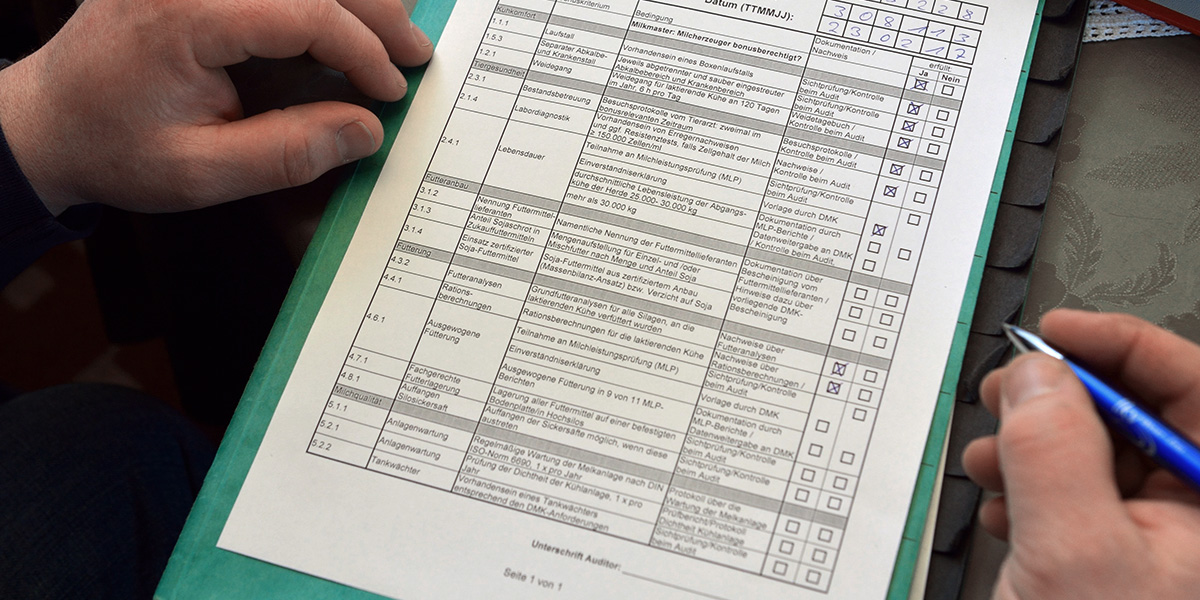 “The Milkmaster Programme is doubly worthwhile for us: On the one hand, it's important that our animals are looked after as well as possible and that we consider the environment, on the other, the bonus programme gives us urgently needed income on top of the milk price.”

DMK opened two Milkmaster Farms in 2015 to promote internal and external dialogue. The farms showcase the work that DMK dairy farmers do every day, and how the Milkmaster Programme works in practical application.

The two Milkmaster Farms have professionally equipped meeting rooms and can be visited by customers, vets, feed consultants, NGOs, the media and DMK employees.

The building-blocks of the Milkmaster Programme.

The Milkmaster-Code  sets out basic and specific standards, rules and objectives to which the milk producers are jointly committed. . The Code thus serves as a guiding principle for responsible milk production. Not only are daily actions and activities guided by it, but also all decisions with relevance for the future. It provides farmers with orientation and society with answers to its questions.

The code, which is divided into 4 chapters, covers all areas of responsible milk production, from calf rearing, feeding, fodder cultivation, environmental and climate protection to work processes on the farm.

The Milkmaster Report is systematically derived from the Code. The aim is to make the standards for responsible milk production measurable and verifiable. It demonstrates a transparent and meaningful documentation of all farms It offers the farms regular reports on their individual situations and progress, including benchmarking with other farms. This forms the basis of individual advice on improvements for every farm.
Put simply, it is a comprehensive questionnaire that picks up on the individual topics (chapters) of the Code and attaches 148 ratios and a defined percentage points-based scale to them. Just under 5,800 dairy farmers or 83 percent took part in the Milkmaster self-assessment in 2017. This corresponds to 96 percent of the milk volume. 77 percent of the dairy farmers with 94 percent of the milk volume participated in the previous year.

On the basis of their self-assessments, the dairy farmers receive an annual report on their results with an in-depth analysis of their own performance compared with that of other dairy farmers. Every two years, every dairy farmer is subjected to an announced audit conducted by an external, independent and accredited certifying company. The data from the self-assessment in the Milkmaster Report were tested.  This confirms compliance with the standards that we have agreed in the Milkmaster Code.

The DMK consultant will answer all questions about milk quality and milking hygiene. A network of specialists, including vets, specialist consultants and scientists, is being built up to provide specialist advice on Milkmaster topics, for example udder and hoof health, shed architecture, environmental protection and resource efficiency. Specialist forums and online seminars support the advisory process as an information platform.

Milkmaster uses a bonus system to reward the work of dairy farmers who perform especially well in cow comfort, animal health, feed cultivation, feeding and milk quality with a cash premium.These topics include, in the cow comfort section, the loose housing system with a specific area for calving or the isolation of sick cows, in animal health, threshold values for somatic cell counts and lifetime yields, and in feed cultivation, the use of certified soya. The bonus is linked to specific important ratios. These include topics from DMK 2020 such as cow comfort, animal health, feed cultivation, feeding and milk quality. The bonus is intended as a reward for those farms that fulfil certain requirements on responsible milk production. At the same time, it is intended as an incentive for all farms to develop further and achieve the goals we have set forth together in the Milkmaster Code.

In the amount of 26.5 million euros for the period from 1 January to 30 September. They amounted on average to just under 0.6 eurocents/kilo of milk, The Milkmaster bonus for 2016 came to a total of 33.6 million euros and in 2017 42.6 million was distributed.

This is what our farmers say.

Genuine opinions about the Milkmaster Programme.

“Our farm has been in the family for 3 generations. The only way to future-proof it for the coming generations as well is by sustainable agriculture. That’s where the Milkmaster Programme comes in and supports us.”

“The Milkmaster Programme has made us focus more on sustainability issues and helps me to continuously improve the sustainability of our farm. That’s also demonstrated by the fact that we’ve been able to increase our bonus over the years, among other things.”

“Responsible milk production plays an important role for me, and it’s important to me to see how we are doing in comparison with peers in the profession. We’ve managed to improve over the last 4 years. With the Milkmaster Programme, we’ll continue on track for a more sustainable future.”

Please contact us with any questions or suggestions you may have

Sustainability as a community task