In the night from Saturday to Sunday, the farmers of the DMK Group were faced with enormous challenges. Snow depths of 30 to 40 centimetres, which in some cases piled up to 1.50 metres due to drifting, ensured that many farms were inaccessible. Especially in the rural areas, the snowploughs had almost no chance against these masses of snow. And so solutions had to be found quickly to allow the milk collection trucks access to the farms: The farmers took the sceptre into their own hands. They worked tirelessly to clear the roads, driveways and farmyard areas, thus making it possible to collect the milk. In addition, they supported the factories by clearing the access roads and recovered trucks that had got stuck on the roads countless times with their tractors. 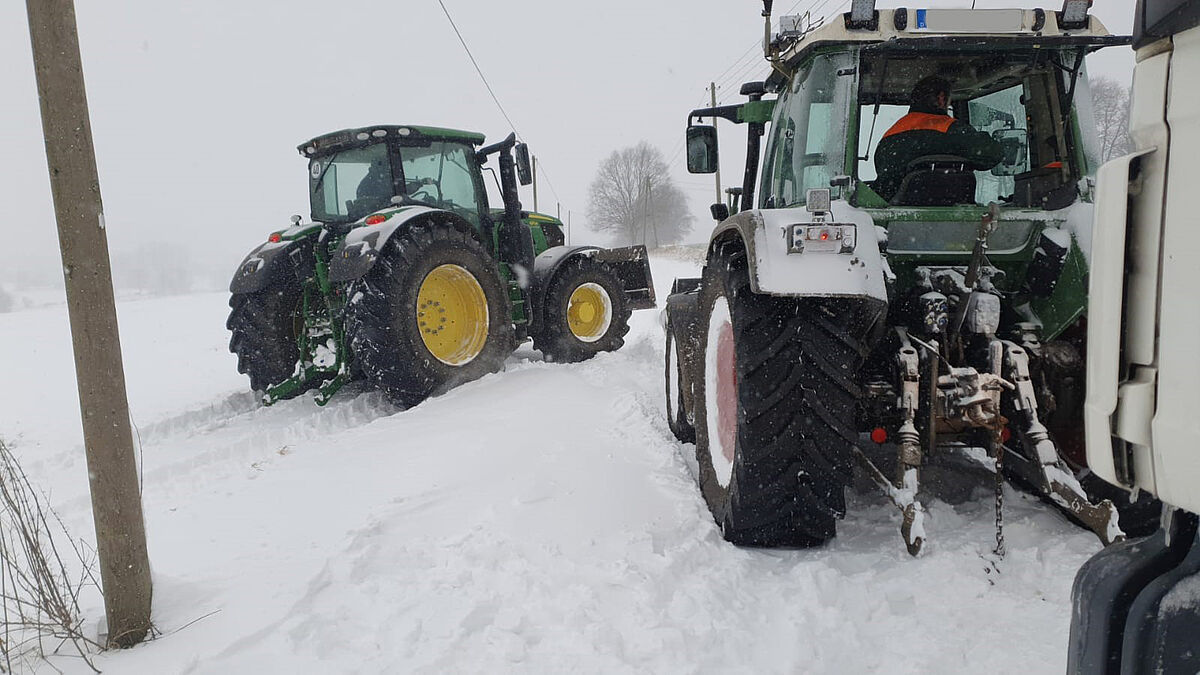 Colleagues like Alexander Leiker, milk collection truck driver from the Georgsmarienhütte plant, who are on the front line these days, can also report on this. The onset of winter means an enormous effort for man and vehicle: "I recently had my 25th anniversary with the company, but I have never experienced anything like this. In some places on Sunday, the snow was right up to the driver's cab due to the drifts on the many smaller roads. Only with the support of the farmers it was possible to continue driving at all. Everywhere on our routes, they cleared the paths for us and sometimes even pulled us out of the snow." 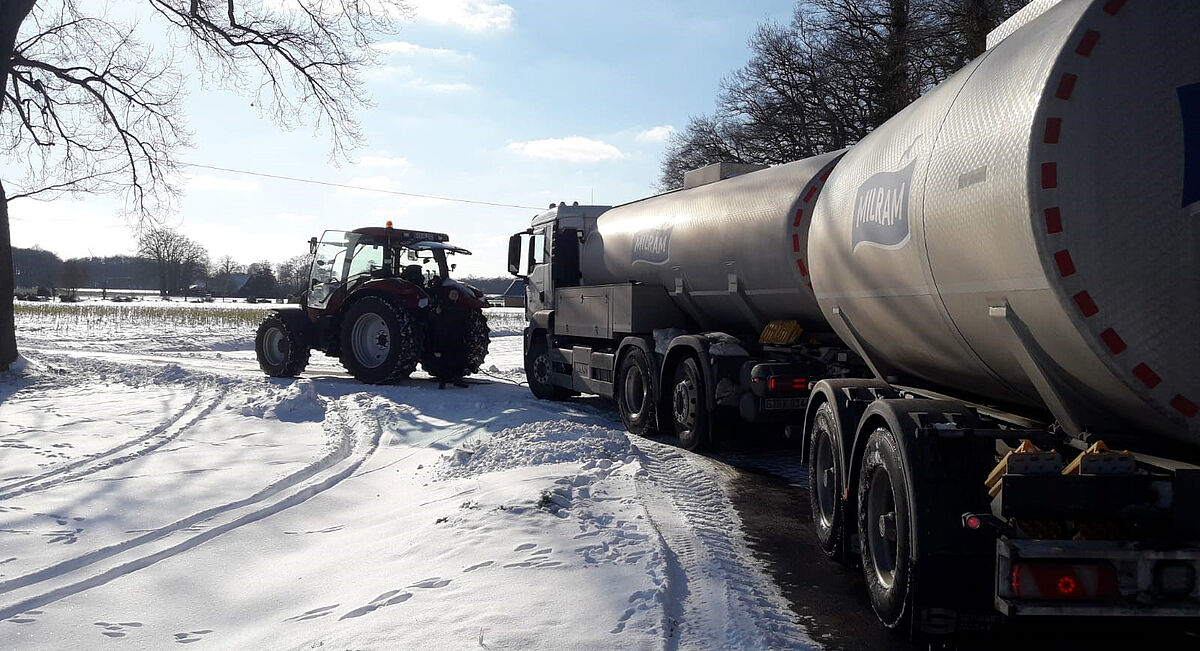 In Erfurt, too, all public life came to a standstill at the weekend. Deep "Tristan" gave the region one of the most severe winter storms of the past decades. This also caused major problems for the local DMK factory. Just getting to work was an enormous challenge, which sometimes required creative solutions - as was the case for Marco Wandrowec. "Due to the huge amount of snow, nothing worked in Erfurt. It was impossible to get around by car, public transportation was also suspended. So I strapped on my cross-country skis and rode to work along the abandoned tram tracks. I only met two policemen on my way, who couldn't help being amazed when I passed them." 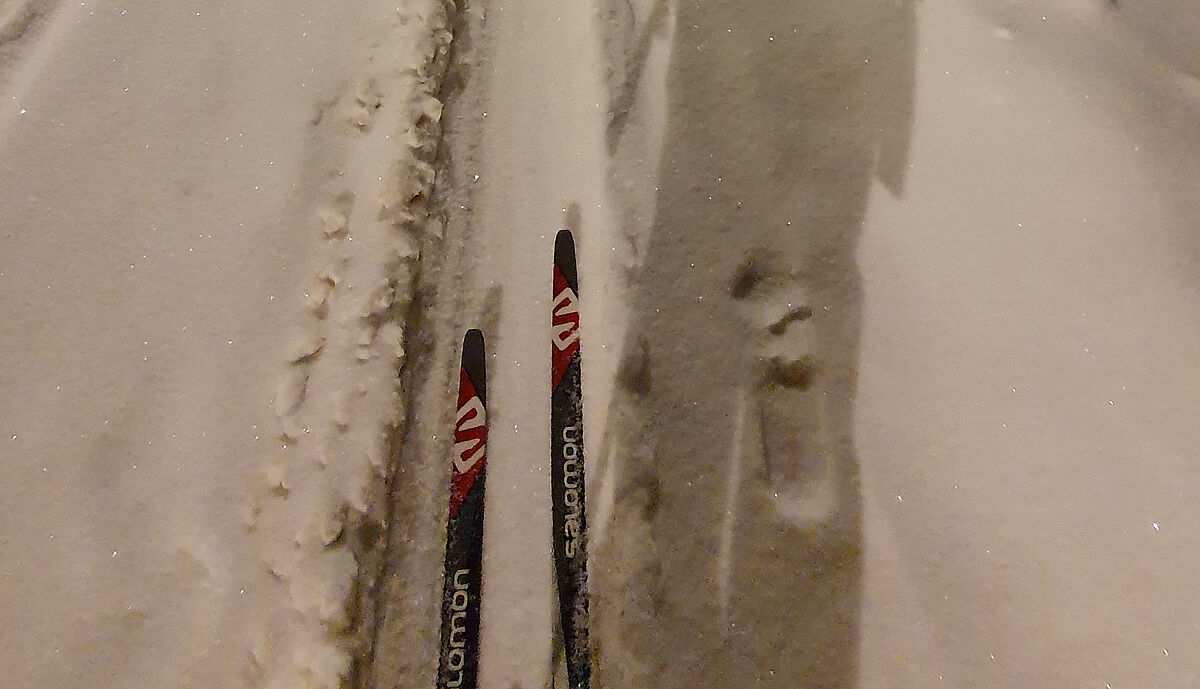 While Wandrowec was thus still able to show up at work, it was even more difficult for employees from rural areas. This meant that all DMK plants had to react flexibly and employees from other areas had to help out wherever there was a need. Especially when it came to removing the masses of snow, everyone had to work together to keep the complex flow of goods at the plant running.

In Everswinkel, Thomas Schulz experienced how the situation came to a head on Sunday morning: "We had already prepared for the predicted snowfall early and an employee was supposed to clear the factory premises with a yard loader. But at around 5 a.m. on Sunday, my employee Werner Kortenjann send me a message saying, 'Boss, I can't do it alone anymore'. So we had to switch quickly and brought in bigger guns." Without further ado, the local gardening and landscaping company was asked for help, which then assisted with a wheel loader. "I had to organise everything from home at first, as my car also was snowed in. Since I only live four kilometres away from the plant, I then set off on foot," explains Schulz. "We made good progress with the wheel loader at first, but the snow masses got bigger and bigger as the day went on. So we organised a second one, but even that was too little at some point. Finally, on Sunday evening, we got a tractor which, together with our yard loader, pushed the snow together while the wheel loaders removed the snow from the site. So we were able to gradually get the situation under control." 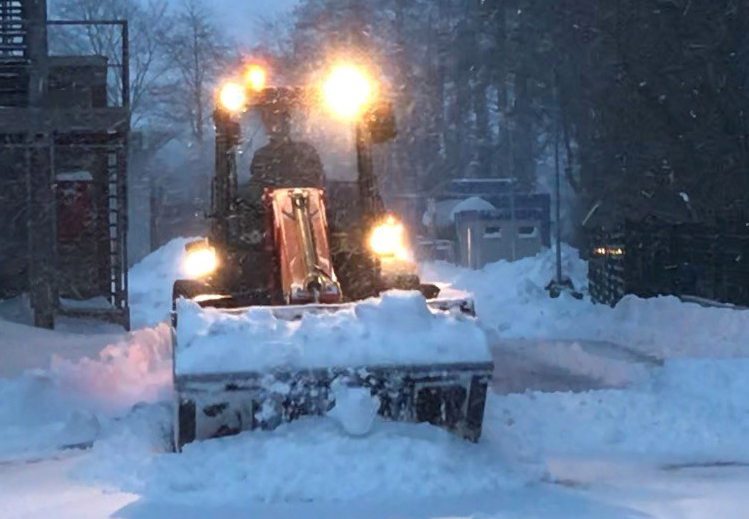 The plant in Georgsmarienhütte was also right in the strip of snow that stretched from the east of Germany to the west. To clear the factory, for example, DMK employee Michael Große Albers spontaneously stepped in on Sunday, bringing his brother and private tractors with him. Together they ensured that the factory premises remained free of snow in the most important places on Sunday. On Monday, his colleague Reinhard Thünker, who was also on duty with his own tractor, took over. In addition, employees like Melanie Stöcker rushed to help, continuously clearing the pavements with snow shovels.

While farmers, milk collection truck drivers and production staff struggled with the masses of snow, colleagues like Maria Bredehöft, Tammo Hagemann and Nico Wentzien in the milk collection department at the Bremen headquarters had to throw all the regular plans out the window on Sunday. From checking the tours that were driven or cancelled to coordinating additional capacities: emergency plans had to be developed immediately to ensure the flow of raw materials. "At first it was mainly the snow-covered roads, now we have to deal with double-digit sub-zero temperatures in many areas, which put an enormous strain on our vehicles," says Maria Bredehöft.

These examples of team spirit and commitment are representative of all those, who helped. The great commitment of our farmers and employees shows once again what a #WE means and how important it is to pull together. We say "THANK YOU" to everyone for their great commitment!

How DMK is getting fit for the future

The digital service platform and machine learning are just the beginning.

In with the new!

Away from silo thinking and towards more exchange. Florian Schomaker, Instructor and HR Manager Organizational Development, on innovation in training