The Taste of the Future

Eating habits are changing rapidly so an external team of chefs is testing products for tomorrow’s meals.

For Thomas Behrens, operations and kitchen manager at a major catering company, it is perfectly clear that in the future, when it comes to nutrition, sustainability, packaging, animal welfare and health will be of central importance. He and his colleagues Khaldun Saidavi, Ralph Sommer and Ralf Opitz are members of MILRAM’s team of 30 chefs. All are drawn from different settings, ranging from luxury hotels to canteens or educatio-nal institutes. Their collective expertise now provides a key part of the research and development of new DMK products that are due to reach the wider market, with the focus on making sure they are suitable for restaurants and canteens. Four times a year, DMK sends the chefs boxes packed with new, classic and vegan foods, which they test and asses in terms of processing, taste, portioning, packaging and usability. They share their evaluations and feedback in meetings held online and in person, with the results providing crucial input for research & development, marketing and sales. The four top chefs are unanimous: Veganism is a trend that is here to stay. “In the university cafeteria in Bremen, they sell 30 percent more vegan or vegetarian dishes than classic meals,” says Ralf Opitz, explaining the situation at his workplace. “Eating habits have changed completely in the last few years.” Khaldun Saidavi, who works as a chef in an educational setting, adds, “The issues of allergens and reducing fat and sugar are also getting bigger and bigger.”

The most important task for the four chefs? MILRAM’s products need to be healthy and delicious. In the past, vegan dishes in particular often tasted pretty similar, as a limited range of ingredients was used. But things have changed. “Take MILRAM’s new vegan grated cheese for oven-baked meals, for example. It tastes great and has first-class melting properties,” says Ralph Sommer, chef at a home for senior citizens. He says what counts is to let new ingredients such as oats or peas shine through and show off their flavors. These dishes should sparkle in their own right and flaunt their own flavor. The aim is not to try to make vegan versions of classic dishes that everyone is familiar with. “In the end, what counts is that our customers enjoy the meals, whether or not they contain animal products.”

“We are fully focused on the market.”

Packaging is a further key area for the four professionals. “Waste reduction is the most important thing, along with hygiene,” says Kahldun Saidavi. “More and more catering businesses are wondering how they can find the space to put things?” The need for answers is more and more urgent, given the growing importance of convenience food that is ready to eat, but also comes with additional packaging. That trend is partly due to staff shortages in the catering industry. “The more ready-to-use the ingredients we can get, the fewer people I need to prepare them,” says Thomas Behrens. Accordingly, MILRAM Food Service offers not only large wheels of cheese but also cheese that is already sliced up into exact portions, and grated cheese. More flexibility in terms of portion sizes will be needed in future, too. “Since the pandemic, we have seen a major drop in the number of guests, particularly in large-scale catering,” says Ralf Opitz, sadly. “We are talking about a drop of up to 70 percent.” So there’s a lot to do for the four chefs in MILRAM’s team of professionals. Ralph Sommer is already looking forward to the challenges ahead: “We are fully focused on the market.” 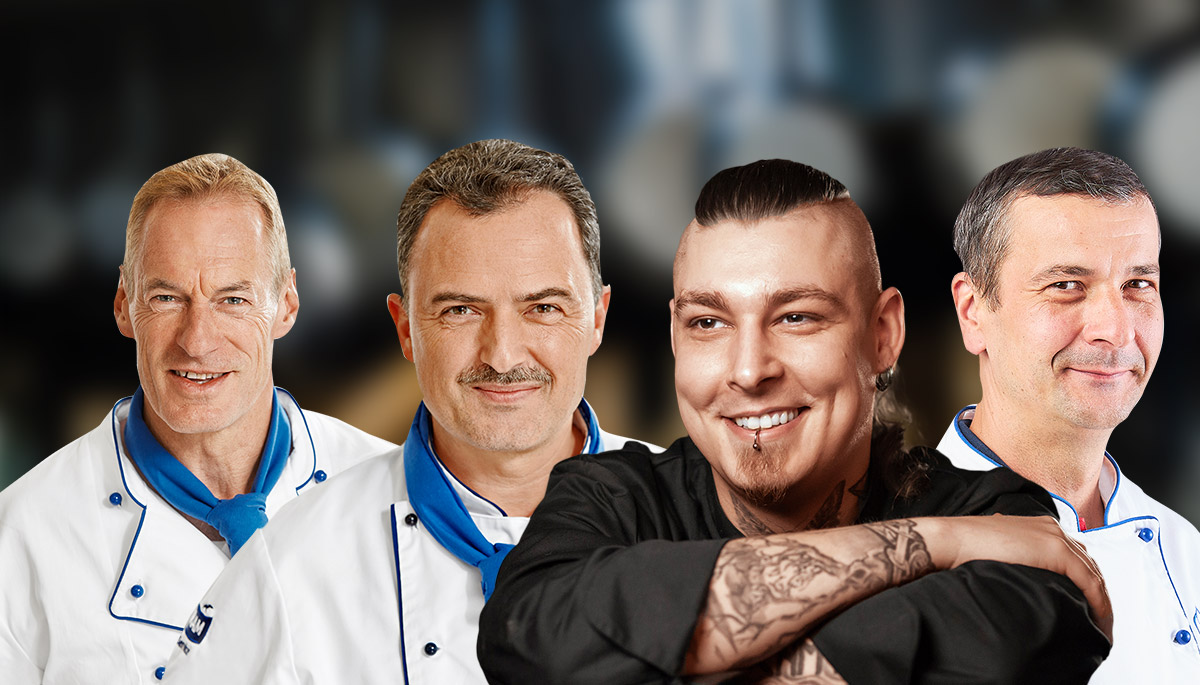 Ralph Sommer, 58, dreamed of becoming a ship’s cook and he joined the navy after completing his training.

He later worked at luxury hotels. He now manages the kitchen at a home for senior citizens. Many of his customers used to have their own cooks, so they have high standards. Products that are low in fat, lactose- and gluten-free are of central importance for him. Sommer has been a chef for ten years and has been a member of the team of chefs right from the start. His favorite MILRAM products are porridge and all of the different types of cheese. He does power training and endurance sport to keep fit.

Khaldun „Kalle“ Saidavi, 54, was born in Berlin and raised in Syria. “Kalle” gained and perfected his skills in luxury hotels with Michelin star restaurants.

He currently runs the kitchen of an educational center, serving customers between the ages of seven and 80 and creating everything from vegan and vegetarian meals to chicken nuggets. Like Ralph Sommer, he has also been a member of the team of chefs right from the outset. He is highly concerned about reducing packaging waste. His favorite MILRAM products are India CurryQuark and cottage cheese. The motto he lives by is: Convenience for all – but always along with healthy and high quality.

Thomas Behrens, 33, trained as a cook and master chef. His roots lie in French cuisine.

He later refined his skills in more than 30 settings, from a vegan restaurant to a five-and-a-half star hotel. He now works for a large catering company which focuses on high-quality canteen concepts. He has been a member of the MILRAM chefs team for five years, testing both vegan and classic products for MILRAM Food Service. His motto is that whatever tastes good, is good. In his spare time, Behrens makes heavy metal music.

Ralf Opitz, 43, decided to become a chef against his parents’ wishes.

What followed can only be described as a dream career: working at topclass hotels and restaurants, as celebrity chef at galas and receptions, and as former chancellor Gerhard Schröder’s curry-sausage specialist. Inspired by oriental cuisine and the rich range of spices, he has fully immersed himself in all there is to know about vegan and vegetarian food. Today Ralf Opitz is production manager of Bremen University’s canteen. He has been a member of the team of chefs for four years. His latest hobby is gardening.

Do it yourself - Cool Quark

Try frozen quark as a delicious a lternative to ice cream on these hot days! Thanks to its high protein content, this tasty summer treat will power you through the day.

A garden right outside the offiffice. Stefanie Ludewig has transformed the Edewecht site with a flowering meadow for people and animals to enjoy.

Graskaas, a seasonal cheese specialty, is loved by retailers and shoppers alike.