< Back to list
21.03.2019
It took three years and a €145 million investment to convert the facility in Strückhausen into Germany’s newest baby formula production center. For DMK, growth begins in the cradle

It was an emotional moment for Stefan Eckert. After nearly three years, the state-of-the-art baby formula plant in the heart of the Wesermarsch near the city of Bremen on the North Sea was finally opening its doors. For the COO of DMK Baby, who spoke at a ceremony, the high-tech transformation of the historic manufacturing facility was both a major challenge and crowning achievement. For residents of Strückhausen, it was a high point in the 135- year history of the town’s major employer. Each year in the new facility, up to 40 million kilograms of milk will be processed and packaged from non-genetically modified sources into Humana powdered baby formula for the German and international markets. The company will draw the raw ingredients from dairy farmers in the region. For the realization of the project, DMK invested more than €145 million – a sum that DMK CEO Ingo Müller called “a clear commitment’’ to dairy producers in Germany’s northwest. Through the upgrade, jobs are being created in a structurally weak region dependent on agriculture. Currently, DMK is employing 170 workers in Strückhausen. The staff will grow to 230 in 2020. 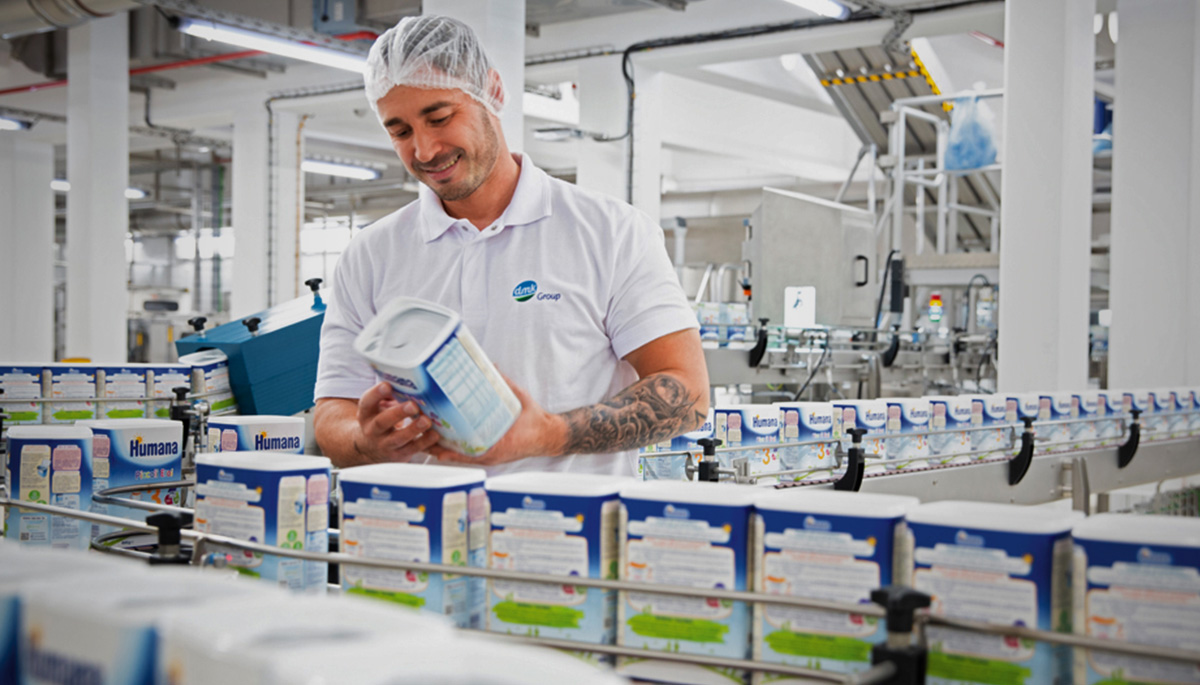 Over coming weeks and months, production in Strückhausen will ramp up. Some lines already are operating on triple-shift schedules five days a week. This pace will soon be expanded to seven days a week. Other production lines will follow. “The investment puts us in a position to satisfy the demands of cutting-edge baby formula production in the future,’’ Müller said. “This pertains not only to our own future production needs, but also to the expected demands from our customers for quality, sustainability and flexibility.’’ Powdered milk used in baby formula is a complex product, which makes production highly labor intensive and challenging. The raw milk used to creat the powder must be of good quality so parents can easily produce high-quality formula and other products for children. For this purpose, the powder is enriched with vitamins, minerals and trace elements important for child nutrition. Milk powder for baby formula is a market with a high net value added. The new facility in Strückhausen is helping sustain the price of milk for DMK dairy farmers in the region. In addition, DMK sees enormous growth potential in the baby food and formula segments. Current annual sales of €200 million are expected to double over the next decade.

After the opening ceremonies, factory chief Gerhard Baalmann led guests along a tour of the new production facility. Suppliers and journalists from Europe, Russia, China and the Middle East followed along an endless maze of shiny news pipes, stainless steel tanks and curing aperatures used for separating and concentrating milk and its components. What one couldn’t see first-hand was the milk and other raw materials used in the facility. This entire production process takes place behind closed doors – in a red marked zone where hygiene standards are as strict as those used in the pharmaceuticals industry. Visitors can visit – only after passing through a hygienic cleansing area – into a so-called yellow area. Even non-industry insiders could clearly see what kind of exacting production standards would be applied to production in the future.

In renovating the facility, only the façade was retained. “Everything inside is new,’’ says Mr. Baalmann. The guests were also informed of another innovation: In Strückhausen, a new form of packaging is being produced designed specifically for needs of mothers. With this packaging, parents will be able to prepare baby formula more safely and hygienically and simply than ever before. Barriers to prevent moisture and air from corrupting powder keep it fresh until it’s ready to be used. The package’s big new opening eliminates the need for parents to directly come in contact with powder. For environmental and hygienic reasons, the new cartons will be sealed without the use of glues. For that reason, no wood is being used in the facility’s red and yellow zones. The collected products are placed onto plastic palettes. When the products move from the yellow to the red zones, the packages are once more prepared for final delivery.

In the future, the Strückhausen facility will also be able to handle at short notice excess production demands from nearby facilities or step in in the event of unforeseen production stoppages. A priority for the facility’s upgrade was the concept of sustainability. The majority of the energy needed during the production process will be reused during the production life cycle. After it is cleaned, water left over from the milk production process will be used to clean the facility’s production equipment. For hygienic reasons, packages for the formula powder are also being made in the facility. With DMK’s new “Baby Strategy,’’ the groundwork has been laid over the midterm for significant growth, emphasized DMK Baby COO Eckert. “We want to return Humana to its old strength,’’ he said, referring to the positive development of the brand over the last few years and its rising market share in many countries. “That is a great catalyst for us to keep moving in this direction.’’

It is clear to Eckert that cereals, pureed baby foods, Milk Minis, Pouches and teas from Humana and other brands are attractive to babies and small children beyond the borders of Germany. DMK’s success with HUMANA shows how the segment is growing internationally. “With this brand, we are represented in more than 50 different markets,’’ says COO Eckert. DMK has its own sales units in Germany, Poland, Spain, Portugal and Italy. Other sales operations are also in China, Russia and Dubai. The focus of our activities lies in western, central and eastern Europe and in Asia, among other locations,’’ Eckert says, describing the company’s international focus. The company has already been able to log one significant victory: In the hard- fought Italian market, DMK with Humana has become market leader in specialty and early-infant food products. Eckert believes the high quality of products can win over consumers worldwide. For nearly 70 years, the Humana brand has stood for innovative baby food and high production standards and quality. That also applies to all of DMK’s other baby product segments. Those areas are all developing in a very positive way, Eckert says. “The double-digit positive growth rates in the international markets are a big motivation for us,’’ says the COO. “We are absolutely convinced we have the right strategy.’’ 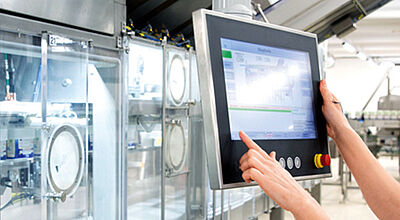 The site is now headquarters of the new myHumana Packs 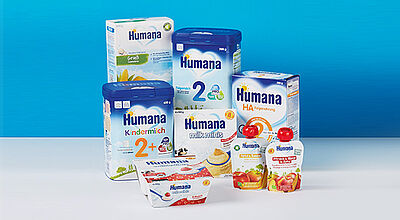 With the opening of its new DMK baby formula center, the Humana brand also has won an exciting new base of operations. With its new “myHumana Pack’’ packaging, Humana has recently brought to market an exciting packaging innovation that is also being produced in Strückhausen. Some key benefits: The new packaging can be opened and closed easily. A special protective membrane keeps the milk powder fresh until it's ready to be used. Special barriers prevent moisture and bacteria and the loss of powder. The new package’s bigger opening eliminates the need for parents to directly handle powder, limiting contamination. An ergonomic design and practical spoon holder also allows parents to fill and handle baby bottles with just one hand. “This innovative packaging enables baby formula to be prepared in a way that is safer, more hygienic and simpler than ever before,’’ says Iris Behrens, the Head of Global Marketing at Humana.

The guests came from many corners of the world. Before they set off on a tour, DMK CEO Ingo Müller, DMK Supervisory Board Chairman Heinz Korte and Lower Saxony Science and Culture Minister Björn Thümler spoke to the group. Mr. Thümler looked back on the 135-year history that “over the last decades has been marked by more low points than high ones. That is why I am more than pleased to note that DMK has again invested in Lower Saxony and chosen the state in Germany to officially begin production of baby formula and baby foods at this top modern facility.’’ Heinz Korte also said the transformation of the facility provides a foundation for a new beginning in Strückhausen: “We can now leverage the power of our cooperative profitably for every member.’’ Ingo Müller completed his career training in Strückhausen. The expectation that “everything would remain exactly as it is’’ is utopic, he stressed. “As long as the market is in motion, the market players must also be on the move.’’ 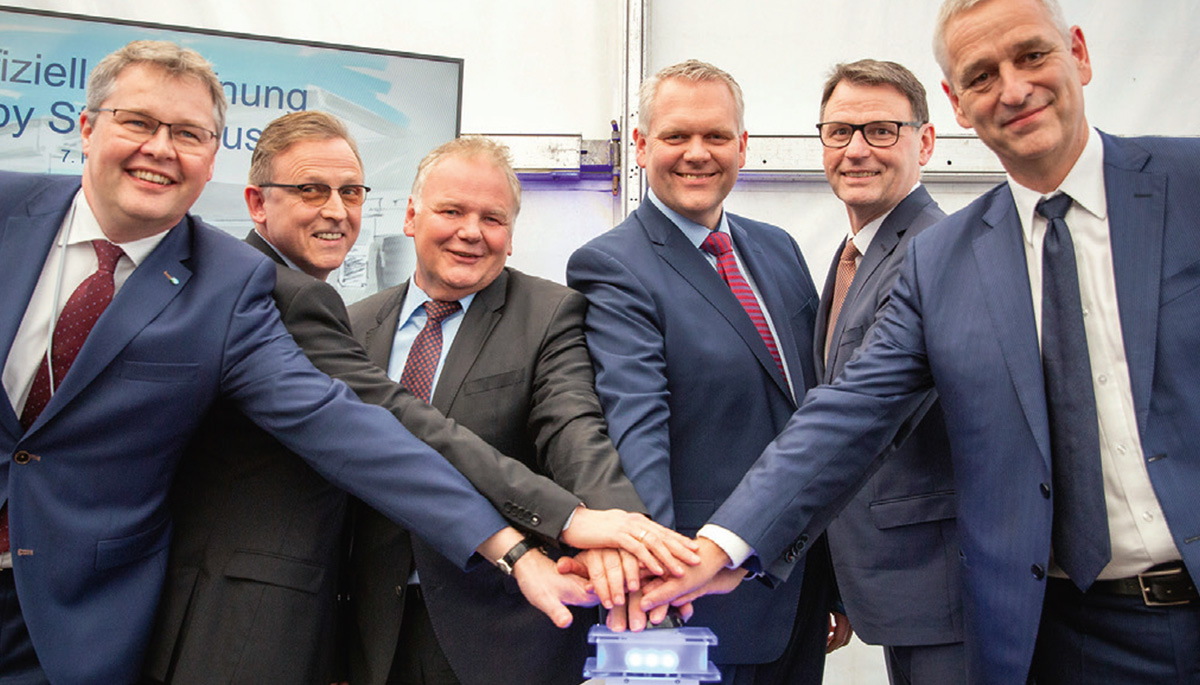 It took three years and a €145 million investment to convert the facility in Strückhausen into Germany’s newest baby formula production center. For DMK, growth begins in the cradle

DMK at the German Dairy Conference

An important meeting in the milk industry: At the German Dairy Conference each year in Munich, the tops in the industry meet to discuss the issues and events of the day.

At DMK, Grooming the Leaders of Tomorrow

A lot has changed since DMK launched its MOVE transformation process, starting at the top of the company. Ines Krummacker, the DMK Chief Human Resources Officer, takes stock