< Back to list
12.04.2019
Everybody’s Talking and measure the now-empty vehicle About Industry 4.0, But DMK is Turning Words into Action 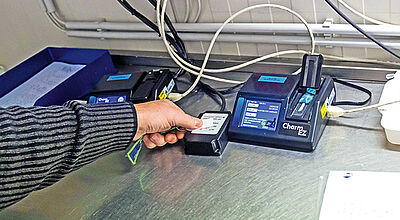 The driver of a milk transport truck has a difficult job: He routinely makes several stops along his daily route, each time performing a different task, and leaves behind a trail of valuable data. To deliver products of the highest quality, DMK Group must organize these movements sensibly, efficiently and carefully document each step along the way. It is critical to put information from this control system online, so data about milk deliveries can be shared with everyone involved.

The cheese dairy in Altentreptow is already using digital processes and technology to manage its milk truck delivery fleet. “As a modern, cutting-edge dairy operation, we have to access the data as soon as it is generated,’’ says Hans-Martin Lohmann, head of the Altentreptow facility. Through sharing, the data can be applied throughout the dairy operation, not just to manage the fleet.

To make that possible, an OPC router became a lynchpin in the data management system, based on its ability to read RFID codes. With RFID tags, a truck and its driver are immediately identified and logged in as soon as the rig turns into one of the stations. Each further step along the route, from check in to check out and everything in between, is tracked and documented. The system can recognize individual milk transport trucks at each station along their routes.

Lohmann is pleased with the end-to-end networking the system provides. In Altentreptow, the system automatically registers truck arrivals, weighs a vehicle and its contents, measures the quality of milk, oversees the pumping out of the milk and ensuing tank cleaning, before weighing the empty truck prior to recording its departure.

The Six Areas at DMK

The genesis of the new system in Altentreptow was a project that identified areas where DMK could profit from digitalizing parts of its operations. Six areas were identified: “Aside from Industry 4.0, where DMK was already active, for example in Altentreptow or in the pilot project “paper-less facility’’ in Neubörger, potential areas that were highly relevant included farm management, digital marketing, smart company, digital competence and new business,’’ explains Barbara Siegert, the Head of Innovation and Digital Transformation at DMK. “We didn’t want to go digital simply because everybody else was doing it.’’ Bernd von Borstel, the Head of Operations in the BU-Industry group and a member of the project “Industry 4.0,’’ sees a range of advantages in the production field from digital technology: “We have set up an internal team of experts to build and apply our expertise.’’ The focus is on boosting efficiency and performance, and optimizing quality control and predictive maintenance. In the last category, digital maintenance technology is helping determine the operational status of machines and estimate when they must undergo controlled maintenance. When people and machines “communicate’’ in this way, unplanned machine breakdowns can be reduced to a minimum.

Everybody’s Talking and measure the now-empty vehicle About Industry 4.0, But DMK is Turning Words into Action

DMK at the German Dairy Conference

An important meeting in the milk industry: At the German Dairy Conference each year in Munich, the tops in the industry meet to discuss the issues and events of the day.

“We want to take part in market developments ourselves”

How a farmer made the fixed price model into a fixed part of his daily activities.